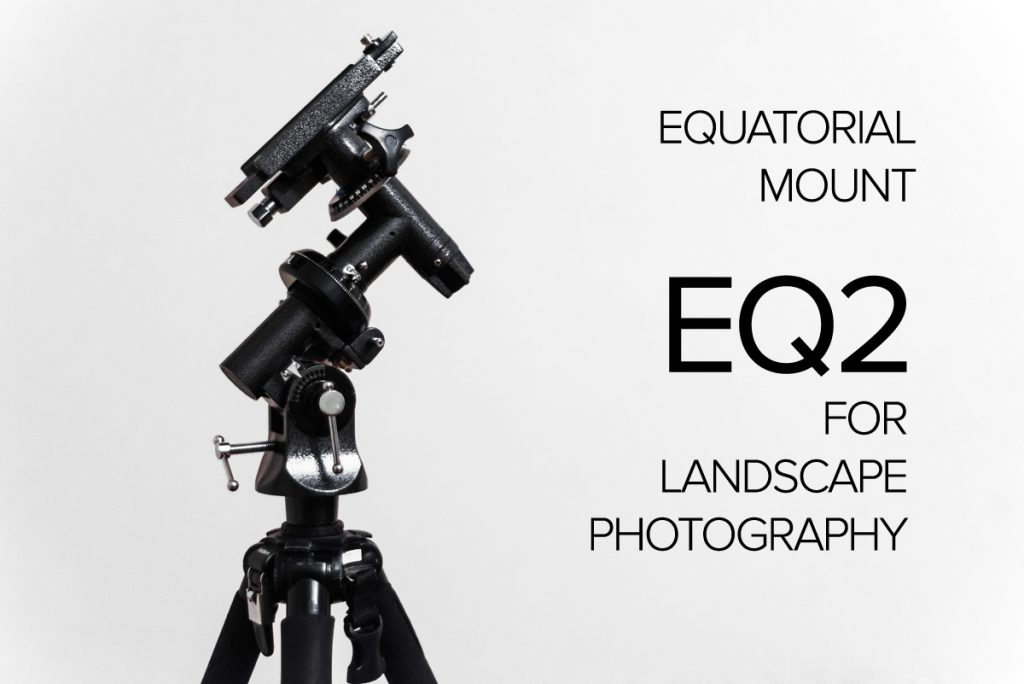 What should a photographer do when he does not have an astro treker but has a telescope?

I used to have an old EQ2 mount from my 130mm telescope. I having found several adapters and installed on it a DSLR camera without any problems. I used this setup for a landscape astrophotography. 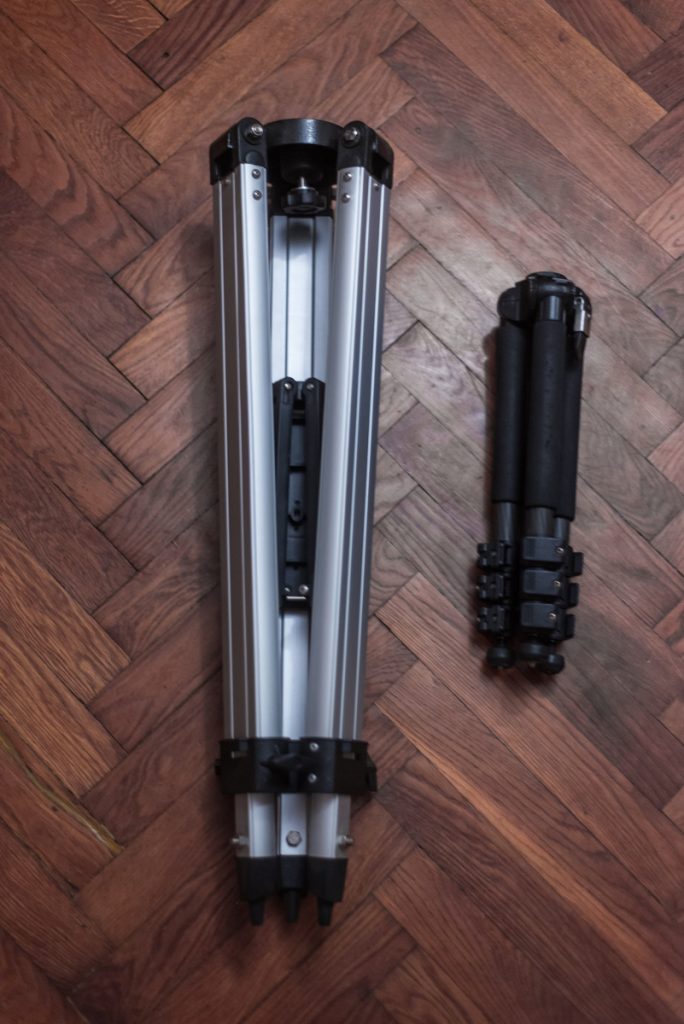 The tripod for EQ2 is very cumbersome and difficult. It provides maximum stability for the entire design of course and this could be used in stationary shooting. But when everything has to be drag on in hiking it’s a problem. I decided to take a chance and replace the tripod for EQ2 with my tiny tripod for DSLRs. The saving of volume is obvious! 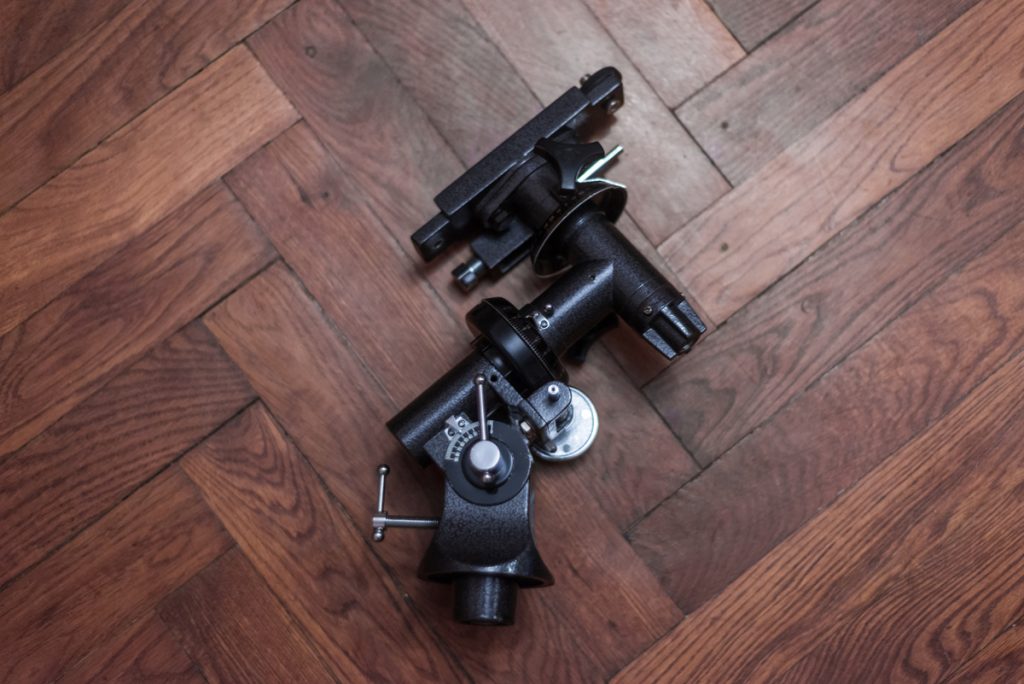 Mount is also quite a big, hard and ugly thing. Represents the accumulation of several axes necessary for working with a telescope, but is absolutely superfluous when shooting landscapes (there would be only one). 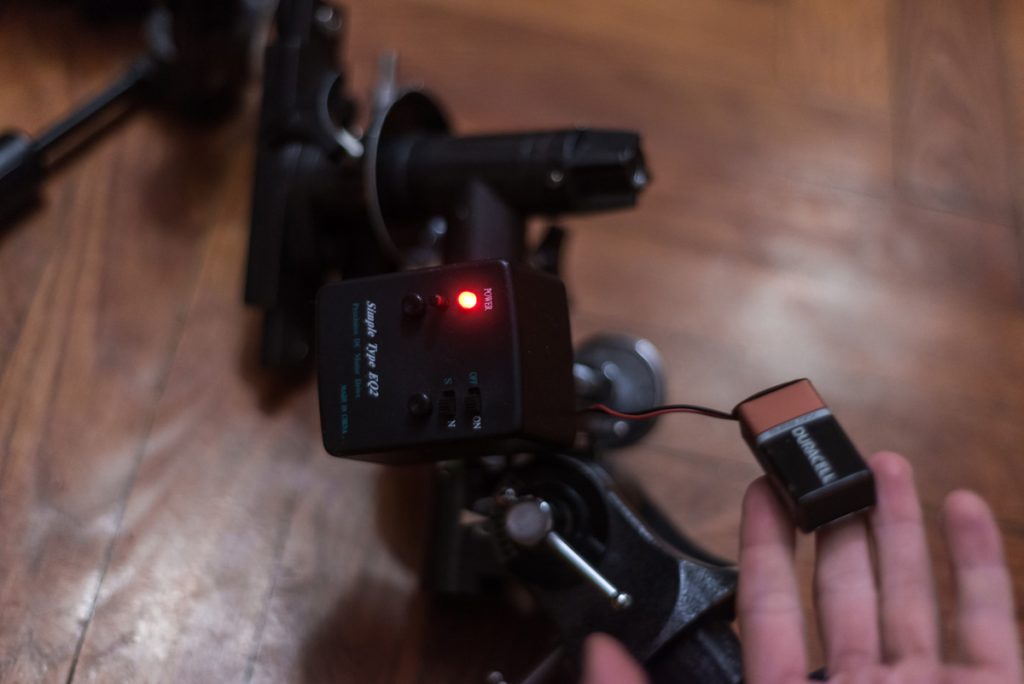 The polar axis rotates the motor locked into such a shaken box. It is screwed up side by side and is powered by a nine-volt battery. The battery while stupidly hanging on the wires. I screwed up the tripod head on one of the anchorages of the upper bar, where the tube of the telescope should be built. On a tripod head, finally, the camera was mounted. 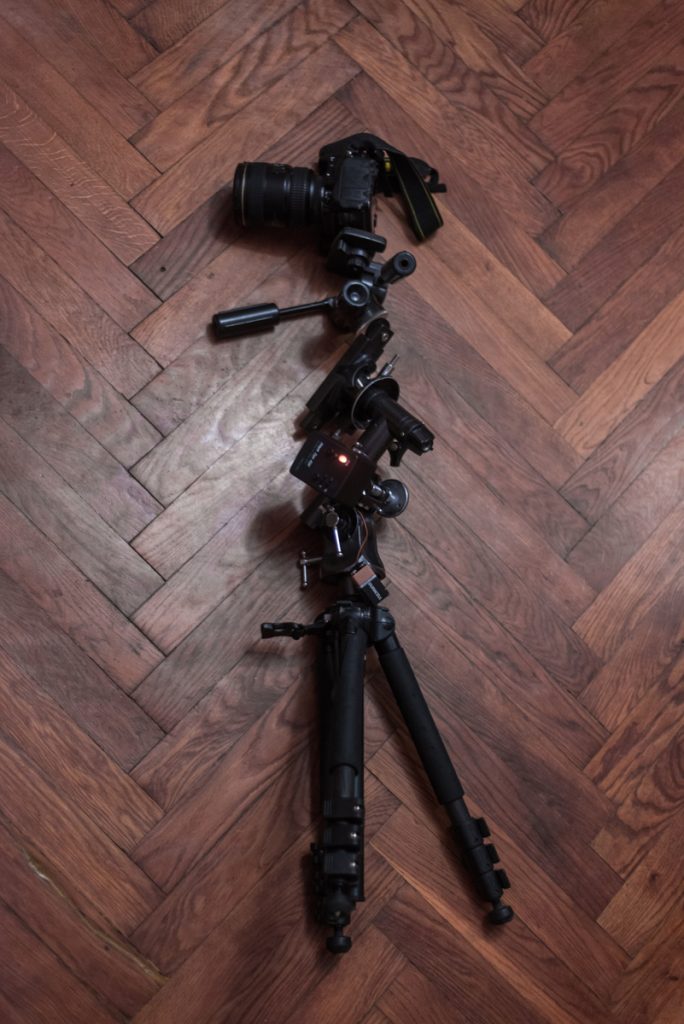 To say that it looked terrible means not to say anything : ) 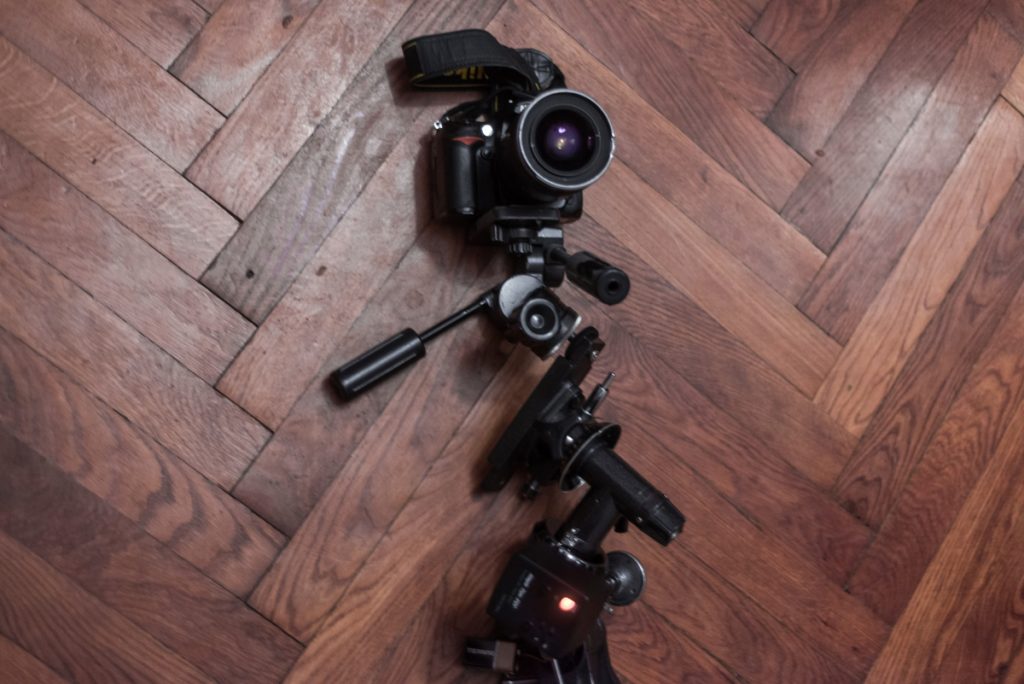 Unfortunately, I did not make any photos of such a mutant in the field, so I show the whole configuration on the floor. Now it’s impossible to put it, because I’ve lost all the adapters.

It became immediately clear that this is an option for masochists. But it was very hard to try. The first tests were pleasing. Even putting the polar quickly, without any precise tools, immediately managed to get an acceptable result on a wide angle..

This is a 30-second exposure without tracking: 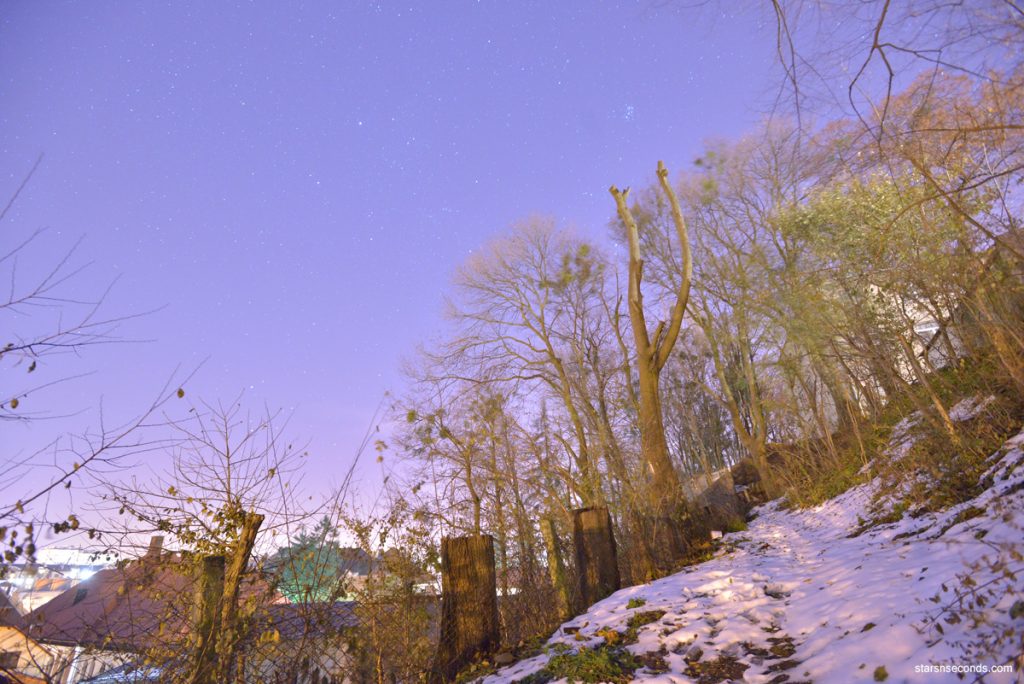 On 100% crop it is obvious that the sky has already completely blurred:

The same picture, but already with the drive on:

On 100% crop everything is very sharped. I can put even long exposures.

It was more complicated with the telephoto lens. I got worried for half an hour, until I was able to put the axis more precisely and adjust the desired speed so that at 200mm and 30 seconds still get a more or less sharp picture: 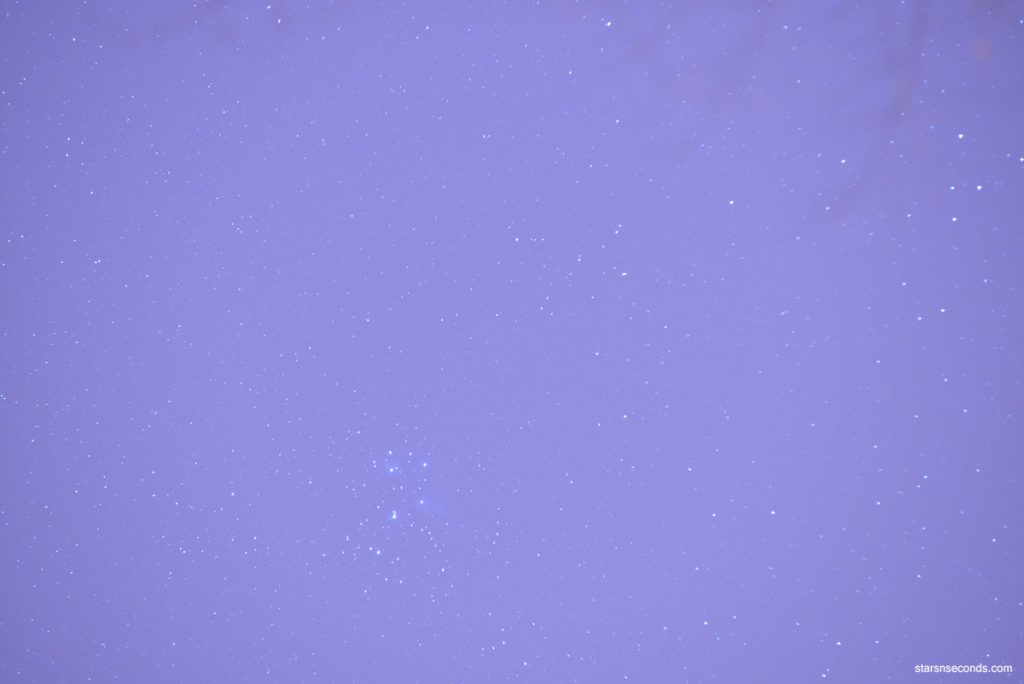 More or less … because at 100% it is clear that stars still a little bait smoothed:

And this is the most successful sample of several dozens of different variations.

There is an understanding that everything is theoretically possible, but it certainly does not cost such effort.

The very design, oddly enough, in the absence of the wind behaves quite calmly. Its main problem is the impossibility of fine tuning. Also, the working surface of the head restraint on which the camera is mounted is oblique. This creates significant inconvenience in 3D-head assembly, where each plane is individually adjusted. It’s interesting that even when working with a conventional tracker, this problem will remain. Therefore, you should use another type of stationary heads, which allows you to compose immediately in all three planes and quickly fix everything in the right position.

I took a hike to mount it only once. Successfully photographed with him 3 nights in the Carpathians. On a wide angle, it received a qualitative result even with 2-3-minute exposures. In the end, he raised the engine, its speed significantly fell and did not give a tangible effect. Then I got a lot of interesting experimental and valuable frames, and also made a solid decision to buy a tracker.

Read about the trip yourself and see more photos in the report Weather anomaly. November 2016