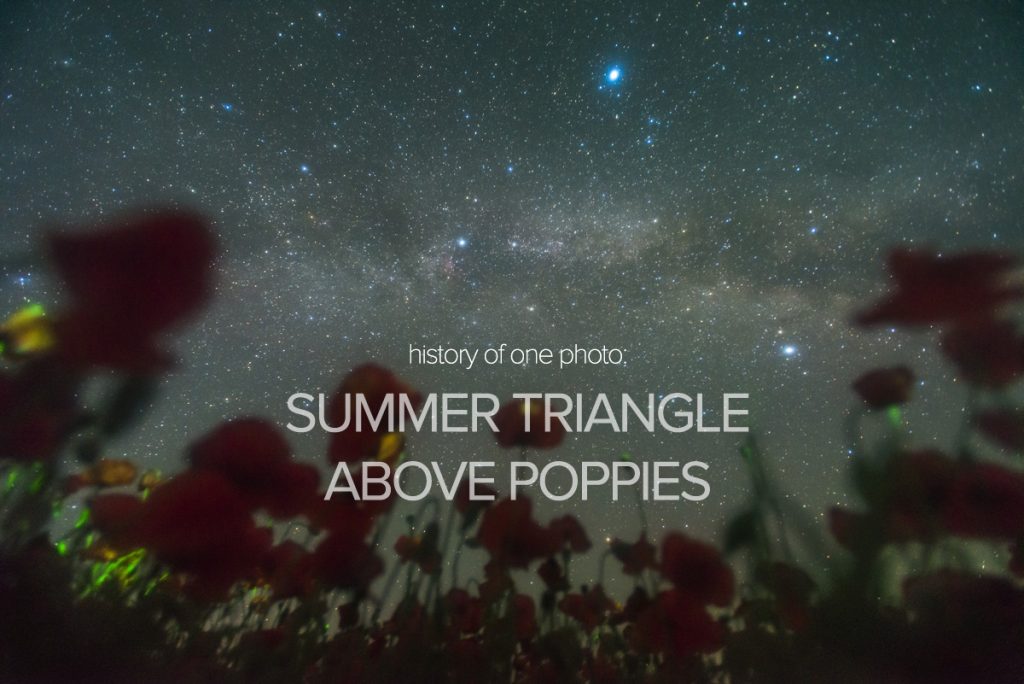 From the very beginning, it was simple. I needed somehow correctly add three bright stars in the sky to any landscape. In the northern hemisphere, this asterism dominate in the sky in summer and rises directly above the observer’s head and therefore has kind of name. This is certainly wonderful for observation, but working on the landscape requires the presence of an object not very high above the horizon. It needs to still have the opportunity to capture the foreground in the frame. This opportunity is in the spring when the triangle rises in the second half of the night, and in the autumn, when it set in the evening. I did not want to wait another few months, so I decided to catch the last spring chance.

The frame still wanted to fill something with summer: lush grass, flowers, berries … It was at the very end of May, the poppy started to blossom, so the solution was found by itself, and a suitable meadow has long been in the spotlight.

I came, photographed it. I got a qualitative result, but I was not satisfied. With triangular everything is fine, but the number of poppies in the picture was not enough. I saw this place before at the peak of blossom when the surface was a solid red carpet of flowers and wanted to get something similar to the ground part of the composition. It was necessary to wait another week. But this created a new problem. Twilight came all later and by the time it was dark enough, Vega was rising too high in the sky. This star barely fitted into the frame and the ground part of picture remained very minor. The time window between the nightfall and the departure of Vega from the composition was a matter of minutes.

Beign there the next time, I was pleasantly surprised by the number of flowers, but the whole sky disappeared behind the clouds. That night was gone.

Only with the third attempt, at last it was possible to start the realization of the conceived. By the way, I got to the place this time with adventures and was almost not late, more about this you can read in the report “Poppies and triangles”.

I make a trial shot at dusk. The are beautiful colors, but I still want a dark sky.

The night is coming. All is well, but the composition collapses: the earth is catastrophically small, Vega barely gets into the frame.

I make a vertical shot. It looks good, but I think a vertical landscape is not a good solution.

The field is illuminated by the searchlight of the farm a kilometer away. This illuminated the foreground well, but, like any artificial lighting, infuriated me. Suddenly the light is turned down. I decided to make another horizontal picture in this darkness.

The result turned out to be contradictory: the most beautiful summer triangle on a beautiful dark sky and an inappropriate narrow strip of land with a completely blurred red mash.

After a few minutes the searchlight turned on again. I already resigned myself to failure and moved on to another composition. In the southern direction was Scorpio with planets and the strip of the Milky Way in the corner. But the annoying lantern is right in the frame.

So I sat down, having got a pretty good backlight on the flowers.

And here it comes to me that exactly from the bottom point, I can try to take another shot with the triangle! I wanted to make the composition more interesting than the banal division into two parts.

To tell the truth, it was extremely inconvenient to crawl in this weed, which takes me to the waist, and I did not want to trample flowers again. Having found several successfully protruding flowers, I began to clean in front of them a small platform for the tripod. The resulting semicircle, despite the artificiality of its origin, has become a good frame for a sky. The last left flower, I actually even held the stem by hand. It grew in a completely different direction and by itself would not have been in the frame:) The height of the camera above the ground was only a couple of dozen centimeters and for the first time in the evening, and in general for all time, I encountered a problem of high humidity. During all the preparations, the front lens is completely covered with condensate. Fortunately, I always have a tourist gas burner with me. I just held it on a small gas under the lens and the condensate evaporated in a matter of seconds. Here the main thing is to be more careful and not to burn the lens:D

The image was made up of 4 takes, averaged in Photoshop to suppress noise. The result I was very pleased. I hope you liked it. Experiment with ideas, try different compositions and implementation options, sometimes the best final result can give a completely spontaneous solution;) 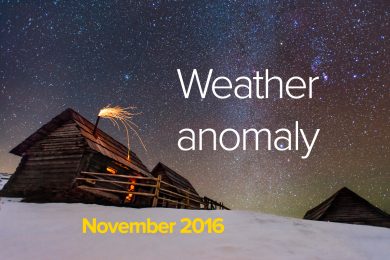 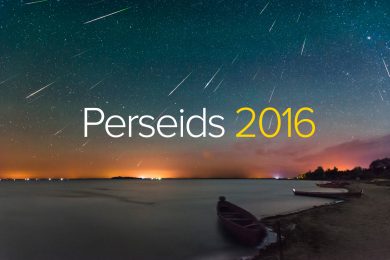 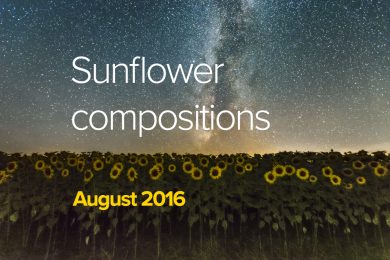